My preferred locations under normal circumstances are remote, sparsely populated where I can be alone, calm, and able to experience the moment rather than just record it. In such situations the aspect of the scene which triggers my making an image are, 20% by Forms (as in Formalism), 40% by perceiving anthropomorphic Relationships (between elements in the scene and or with the viewer) and 10% are driven by a Recognition of another photographer’s work.

The corona virus lock-down stopped my field trip to the Shetland Island and limited my photographic range to the city of Edinburgh. However, I have been able to find remote, unpopulated, and quiet locations within the city, such as business areas, brown–field sites and, now empty, tourist locations. But how, if at all, has this changed the images I produce? Are my images still being triggered by the same characteristics? 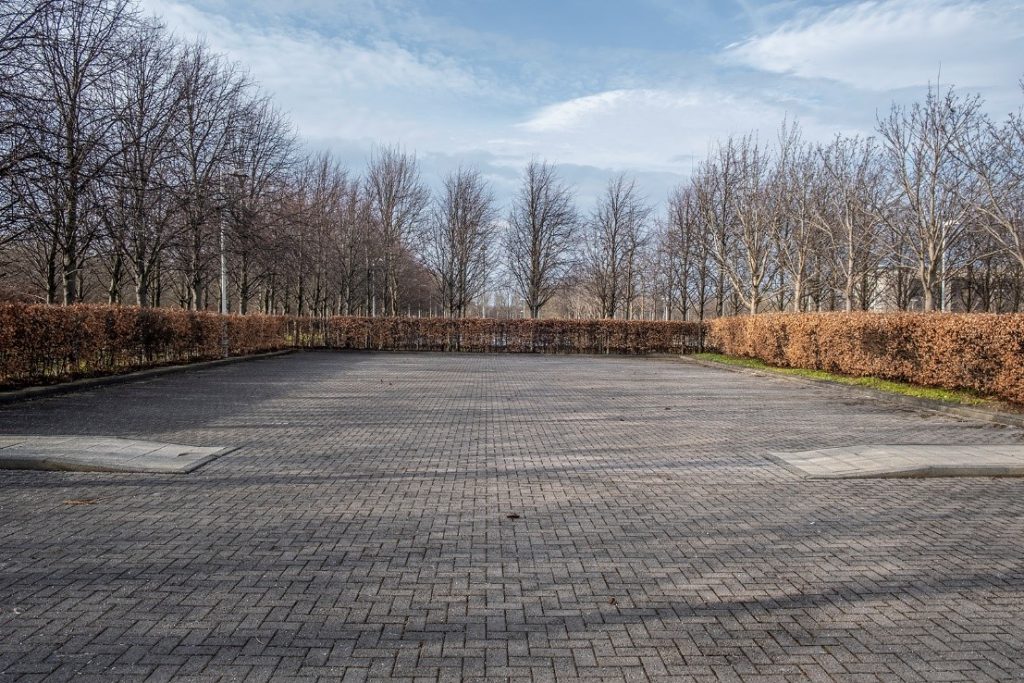 The above, empty carpark image was triggered by the Forms perceived in all those rectangles. But later I also perceived the sense of threat coming from the surrounding, Triffid like trees being held back by the hedge. The Forms, the flat lighting and the simplicity give a sense of calm which attracted me at the time, it was only later, during image review, that I noticed any Relationship between the viewer and the implied threat from the trees. 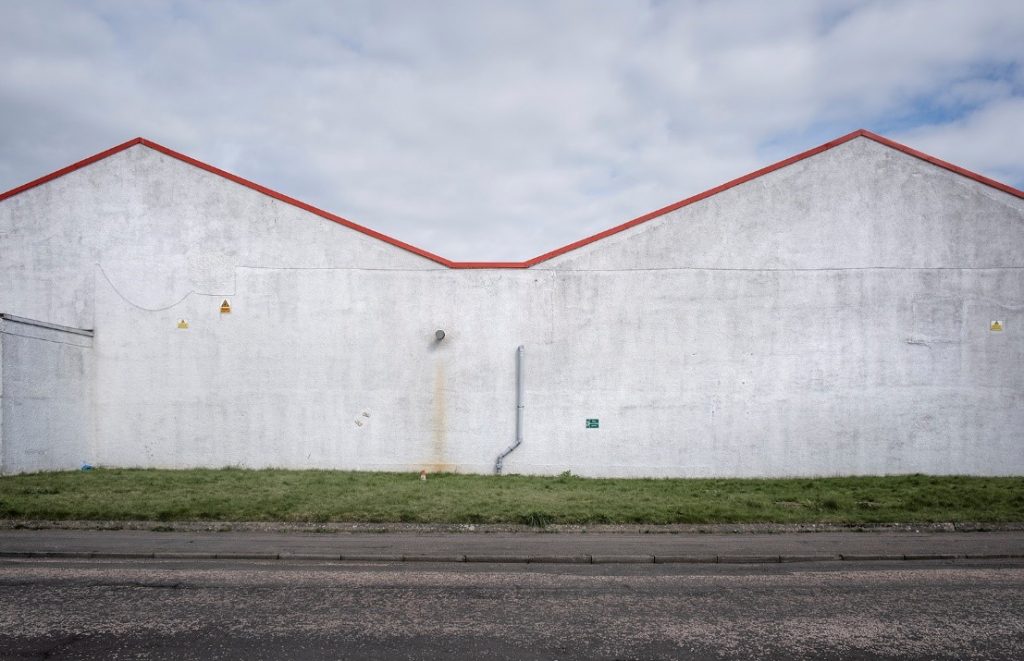 This is very much a Recognition image, inspired by Lewis Baltz. Like the carpark it was the simplicity and strength of the Forms that I first noticed. Even after later review this image remains purely a Form image with no Relationship narratives being apparent to me.

Here a Recognition of Lewis Baltz and R Adams’, New Topographic style of image was the trigger. However, there is also a strong Relationship aspect coming from the family of self-isolating trolleys, corralled and well away from everything else.

Here is another image that was triggered by Form, the three strong bands of colour going across the scene.

However, Relationship tropes such as exclusion & power/ subordination are still strong drivers, as the viewer is being excluded from whatever activity is going on beyond the fence. Note the tyre tracks veering away from the fence as if someone else was also discouraged by its presence.

This is an example of Isolation emphasised by the geometry (Form) of the path. That all the seats are empty, facing the same way, towards the viewer, and not towards each other, seemed an appropriate metaphor for a time of self-isolation. With the phone mast behind as a reference to the most practical way to avoid the current effects of isolation. The mast, being behind the seats, again appears to isolate anyone using them from potential communication.

The next two images are about the strange things people sometimes do to their own environment. 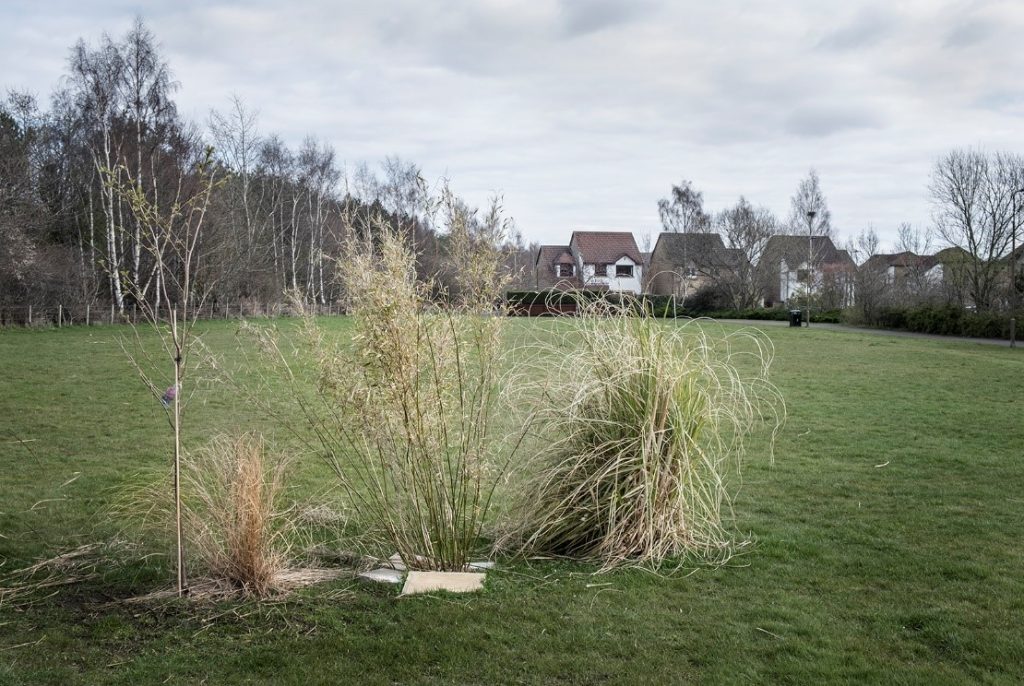 The above is an obviously deliberate arrangement of plants but in the middle of a green area that was formerly a football pitch. Why? Who decided to arrange this tree and grasses in such a tight formation in the middle of this open, recreational area?

Above, this uncollected, largely dog waste has become almost monumental when set against the bush and centrally placed. Whereas the first of these images indicates someone who cares about the location, whether or not others agree with what they have done, the second image demonstrates how little the dog walkers and others respect or appreciate their area.

Charlotte Square in Edinburgh is the regular location for the Book Festival and looks here as if the grass has still not recovered from last year’s festival. Additionally, the building behind is under repair. The statue seems to be unaware and ignoring the chaos around, much like those who organize and benefit from the tourism that damages the very thing that attracts people to Edinburgh. It feels like a suitable metaphor for both lock down and my other concerns.

I had never seen the Carlton Hill monument without people before making this image. With most of the grass gone, trampled by tourists, it is another metaphor for lock down.

So how has lock down changed my photography?

My perception of Relationships between image elements and or the viewer is the trigger of 40% of images when taken at my favourite, remote locations. However, in the city, Relationships are never more than a secondary image trigger with Form being the most common, followed by Recognition. I believe this is because, in the city, however quiet it appears, I cannot become sufficiently Mindful to fully engage with the subject matter and so perceive potential Relationships. This is because I can never feel invisible, I am always aware that people are nearby and might disturb me. Secondly, I am travelling on my bike and must always be conscious of where I have left it. Hence, I cannot move around free of other concerns. Finally, again because of the bike, I do not carry the tripod that normally slows down my processes and thinking, allowing me to become fully absorbed in the moment.

However, I do enjoy the emptiness and almost post-apocalyptic atmosphere that I can find around the city today. It brings me as close as possible to my teenage imaginings of what it would be like to be the last person on earth. At that age such a prospect was actually attractive, but not any longer.

This site uses Akismet to reduce spam. Learn how your comment data is processed.